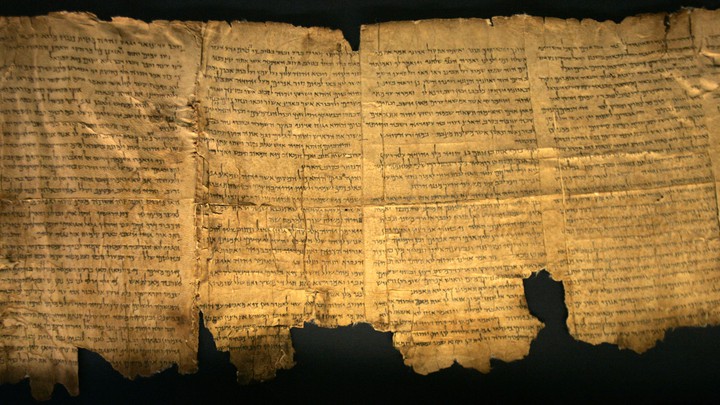 Months of testing confirm earlier suspicions that the fragments
were made in modern times. What happens next?

WASHINGTON, D.C. - On the fourth floor of the Museum of the Bible, a sweeping permanent exhibit tells the story of how the ancient scripture became the world’s most popular book. A warmly lit sanctum at the exhibit’s heart reveals some of the museum’s most prized possessions: fragments of the Dead Sea Scrolls, ancient texts that include the oldest known surviving copies of the Hebrew Bible.

But now, the Washington, D.C. museum has confirmed a bitter truth about the fragments’ authenticity. On Friday, independent researchers funded by the Museum of the Bible announced that all 16 of the museum’s Dead Sea Scroll fragments are modern forgeries that duped outside collectors, the museum’s founder, and some of the world’s leading biblical scholars. Officials unveiled the findings at an academic conference hosted by the museum.

In a report spanning more than 200 pages, a team of researchers led by art fraud investigator Colette Loll found that while the pieces are probably made of ancient leather, they were inked in modern times and modified to resemble real Dead Sea Scrolls. “These fragments were manipulated with the intent to deceive,” Loll says.

The new findings don’t cast doubt on the 100,000 real Dead Sea Scroll fragments, most of which lie in the Shrine of the Book, part of the Israel Museum, Jerusalem. However, the report’s findings raise grave questions about the “post-2002” Dead Sea Scroll fragments, a group of some 70 snippets of biblical text that entered the antiquities market in the 2000s. Even before the new report, some scholars believed that most to all of the post-2002 fragments were modern fakes.

“Once one or two of the fragments were fake, you know all of them probably are, because they come from the same sources, and they look basically the same,” says Årstein Justnes, a researcher at Norway’s University of Agder whose Lying Pen of Scribes project tracks the post-2002 fragments.

Since its 2017 opening, the Museum of the Bible has funded research into the pieces and sent off five fragments to Germany’s Federal Institute for Materials Research for testing. In late 2018, the museum announced the results to the world: All five tested fragments were probably modern forgeries.

But what of the other 11 fragments? And how had the forgers managed to fool the world’s leading Dead Sea Scroll scholars and the Museum of the Bible?

“It really was—and still is—an interesting kind of detective story,” says Jeffrey Kloha, the Museum of the Bible’s chief curatorial officer. “We really hope this is helpful to other institutions and researchers, because we think this provides a good foundation for looking at other pieces, even if it raises other questions.”

To find out more about its fragments, the Museum of the Bible reached out to Loll and her company, Art Fraud Insights, in February 2019 and charged her with conducting a thorough physical and chemical investigation of all 16 pieces. Loll was no stranger to fakes and forgeries. After getting her master’s in art history at George Washington University, Loll went on to study international art crime, run forgery investigations, and train federal agents on matters of cultural heritage.

Loll quickly assembled a team of five conservators and scientists. From February to October, the team periodically visited the museum and pulled together their findings. By the time their report was finalized in November 2019, the researchers were unanimous. All 16 fragments appeared to be modern forgeries.

First, the team concluded that the fragments were seemingly made of the wrong material. Nearly all the authentic Dead Sea Scrolls fragments are made of tanned or lightly tanned parchment, but at least 15 of the Museum of the Bible’s fragments were made of leather, which is thicker, bumpier, and more fibrous.

Like sharing good news?
No matter how small, we want positive news from around the world in this day and age of commercialised, entertainment based unreliable news. Simply post it in this section and we'll take care of the rest: muftisays.com/forums/37-news-articles/
Want to moderate/edit?
News sharing mod tasks range from sharing articles on the forum news section to marking news posts as articles, adding cover photos and sources. Please send a PM to abu mohammed (registered members with rep higher than 100)
news.muftisays.com is not responsible for the content of external sites. Articles are shared using fair usage policies with backlinks to their sources.